Using our Pocket Developer HTTP Request plugin, you can create tasks in Asana directly from Campaign Builder. (Note that details about Asana’s API are available here.)

Now you are ready to publish your HTTP Post and test run it. (For more information on Asana task parameters you can set, see https://asana.com/developers/api-reference/tasks#create.) 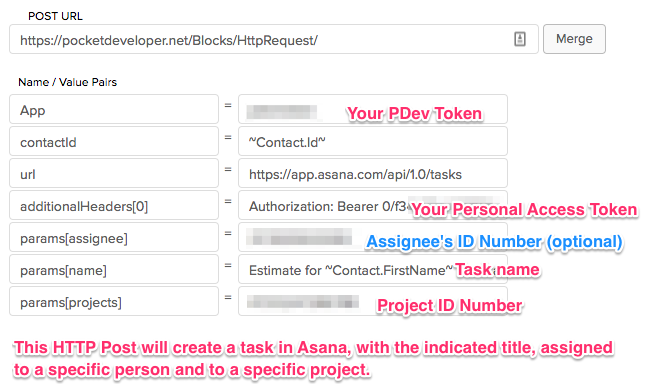 Infusionsoft’s User List Box type field can be handy. If you want to track which staff members are connecting with contacts in particular roles, for instance, you can create a custom field for each role. The User List Box type field will show you a dropdown list of all your Infusionsoft users for easy data entry in the contact record screen or an internal form or webform.

Unfortunately if you want to send automatic email notices to those staff members, the User List Box is basically useless. You’d need to have a separate custom field (in addition to the User List Box) to store the email. For many users, burning up so many custom fields is a problem.

With our Advanced Merge Field Notation, you don’t need to store user data in additional custom fields. You can drill down through the User List Box to get any readable data from the User table.

First, it helps to understand that while the User List Box displays a name, the data it actually contains is the user’s id number. This is the number you would see in the url if you went to edit the user data in Infusionsoft (Admin > Users > click user name).  So what we need to do is get the email field for that user id from the User table.

To do so, we’re going to use the parentheses reference notation in Pocket Developer. You can get any specific record from a table by inserting the id number in parentheses after the table name and before the period. For instance:

will get the contents of the FirstName field for contact id number 12. Similarly:

will get the email address of user id number 12. Of course you won’t want to hardcode the id number each time you use Pocket Developer; instead you’ll want to merge in the User List Box field contents like this:

You can use this to either temporarily get the email address and put it in an email field (e.g., EmailAddress2) or custom field, adn then send the email out using that field. Or, if you are using the PDev Email Anyone plugin, you can simply enter that text as the value of the “to” parameter:

Infusionsoft’s Decision Diamonds are fantastic. But sometimes they just aren’t sophisticated enough. You can set up complicated cascading diamonds, but it’s not much fun. So we thought we’d add the ability to do some conditionals in Pocket Developer plugins. To this end, we developed the {if} {then} {else} notation.

Let’s say you want to use AnyText to save something to a custom field, but only if another custom field has a value. For instance, maybe if the contact has a spouse, you want to put the number 2 in the “Number Registered” field. You could create an HTTP Post like this:

In the textToSave value, insert {if} followed by the field you want check for a value. Then insert {then} followed by whatever value you want to save to the saveTo field. This can be a number or text.

You can get more complicated by adding an {else} statement. Let’s in addition to entering a 2 when there’s a SpouseName, you want to enter a 1 if there is no SpouseName, you could make your textToSave value like this:

Remember, if you want to merge in data from a merge field, include the tildes:

(I’m not really sure why you’d want to do this, but you get the idea.)

Another way to use this conditional notation might be to set a default. For instance, if you are using AnyDate and you have set the date parameter to a field that is empty, the process will fail as a bad request (because you have given it no date input to convert or copy). You can fix this by using {else} to set a default date like this:

As always, we recommend thorough testing as you implement these advanced features. If you have any questions or run into any issues, let us know! 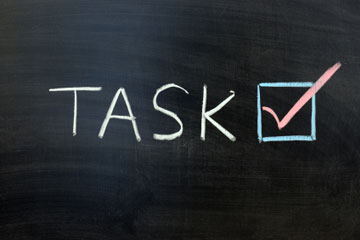 The Pocket Developer plugins Any Text Anywhere and Any Date, Any Format, Anywhere really do mean anywhere… not just on contact records. But getting access to other record types requires a little bit of know-how.

Accessing information in tasks, appointments, and notes is particularly tricky, because believe it or not these three different entities are all stored in the same data table in Infusionsoft. That means you usually need to specify which type of entity you are looking for. Even so, there’s a good bet that the contact will have more than one of these entities, so you’ll also need to be specific about which one you want to work with.

That’s where our Advanced Merge Field Notation (we just call it AMN) comes in. Let’s break down how to use AMN to get data to (or from) tasks, appointments, and notes.

Infusionsoft stores tasks, appointments, and notes all in the same database table, named ContactAction. (View Infusionsoft’s table schema here.) The first thing you’ll want to know is how the database field relate to each of the three entities.

In addition to these visible field, there is one important invisible field called “IsAppointment”. This field is set to 1 if the entity is an appointment, so it is useful for narrowing down items to just appointments.

We use cookies on our website to give you the most relevant experience by remembering your preferences and repeat visits. By clicking “Accept”, you consent to the use of ALL the cookies.
Cookie settingsACCEPT
Manage consent

This website uses cookies to improve your experience while you navigate through the website. Out of these, the cookies that are categorized as necessary are stored on your browser as they are essential for the working of basic functionalities of the website. We also use third-party cookies that help us analyze and understand how you use this website. These cookies will be stored in your browser only with your consent. You also have the option to opt-out of these cookies. But opting out of some of these cookies may affect your browsing experience.
Necessary Always Enabled
Necessary cookies are absolutely essential for the website to function properly. These cookies ensure basic functionalities and security features of the website, anonymously.
Functional
Functional cookies help to perform certain functionalities like sharing the content of the website on social media platforms, collect feedbacks, and other third-party features.
Performance
Performance cookies are used to understand and analyze the key performance indexes of the website which helps in delivering a better user experience for the visitors.
Analytics
Analytical cookies are used to understand how visitors interact with the website. These cookies help provide information on metrics the number of visitors, bounce rate, traffic source, etc.
Advertisement
Advertisement cookies are used to provide visitors with relevant ads and marketing campaigns. These cookies track visitors across websites and collect information to provide customized ads.
Others
Other uncategorized cookies are those that are being analyzed and have not been classified into a category as yet.
SAVE & ACCEPT
©2015-2019. The API Guys